FAQ on Coronavirus and Mefi: check before posting, cite sources; how to block content by tags


I've been watching several of my favorite westerns lately and it suddenly occurred to me: I don't know squat about how the telegraph system worked in its early days. I'm NOT so much asking about the mechanics of individual units — I'm talking about the overall setup. Was there some sort of central switching office? Was it one big party line? Did a message from coast-to-coast make a bee-line to its target, or was it relayed by numerous intermediaries? Did they have some sort of net-like addressing system, so that an operator in St. Jo' knew he was in contact with Denver? (Wikipedia offers little here).
posted by RavinDave to Technology (11 answers total) 2 users marked this as a favorite
Neal Stephenson to the rescue. [warning, 56 pages]
posted by b1tr0t at 12:14 AM on April 15, 2005

You might want to look up this book : The Victorian Internet : The Remarkable Story of the Telegraph and the Nineteenth Century's On-Line Pioneers
posted by crunchland at 12:15 AM on April 15, 2005

You actually sent me off reading for more than an hour RavinDave - I'm not complaining - fascinating history. I didn't see any definitive answers to your question.

But the 2 things that stood out were: When a telegraph was sent (via many different systems depending on location and time period) there was an identification code in the message for the receiving office (and sending office) AND you're right about relaying: poor quality in both batteries and signal lines meant that messages, at least early on - beginning 1850 or thereabouts - which were essentially electrical currents, would be impeded/lost over any distance. So an office at one railway station would send a message to the next office on the line which would relay it on.....God knows how many times/how far.
As for transamerican telegraphs I can't say - I'm presuming that they weren't in use until nearer the 20th century by which time power sources will have been a bit better. I can't imagine 500 relays or whatever - sounds illogical on the face of it. But I don't know for certain.
There was only a small amount of traffic to begin with - none private - too expensive: 1/4 of a middleclass person's day wage for 10 words.
posted by peacay at 1:22 AM on April 15, 2005

Nice links and comments, all. Unfortunately, they are provoking more questions than they are answering. (Who fronted the money to start it? Was it a military thing co-opted by business or the other way around? Were they plagued with snake-oil salesmen sending bogus messages on cut-rate "spleen pills" or instructions how to MAKE*MONEY*FAST) And I didn't even consider international communication (which I'm sure came way late in the game) until I checked b1trot's link. Ach! I'm gonna have to break down and buy that book crunchland mentioned.
posted by RavinDave at 4:39 AM on April 15, 2005

I can't imagine 500 relays or whatever - sounds illogical on the face of it.

Sounds pretty damned logical to me when the alternative was sending messengers cross-country on horseback. It's pretty difficult to understand in today's context, I know, but in the context of the time it was a major breakthrough; a series of people didn't need to do that travel; the elctrons did it. That was a helluva lot more efficient.

Think about the first cross-country auto journey. They took weeks/months to complete and would seem very inefficient by today's standards, but they were quite a breakthrough in their day. It's easy to take technology that's become routine for granted.
posted by Doohickie at 4:41 AM on April 15, 2005

Lewis Coe has written a great early history, "Telegraph: A History of Morse's Invention and Its Predecessors in the United States"
posted by Marky at 7:45 AM on April 15, 2005

The book Code: The Hidden Language of Computer Hardware and Software spends the first few chapters discussing the telegraph system, at least on a technical, practical level. It's a lovely book otherwise, too. Take a look at it the next time you visit a bookstore.
posted by odinsdream at 7:58 AM on April 15, 2005

...Congress passed the Pacific Telegraph Act authorizing a subsidy in the form of a loan of $40,000 a year for 10 years to any company that would build a telegraph line from the western boundary of Missouri to San Francisco.

Despite the offer of congressional funding, the building of the transcontinental telegraph line was largely the result of private enterprise. Congress' loan offer was not picked up by the telegraph companies.

As segments of the Deseret Telegraph line were completed, students from the telegraphy school took charge of operations in the various settlements. William Bryan ran the telegraph office in his hometown of Nephi?but not for long. Years later he remembered why so many young women learned telegraphy: "There was not much commercial business, and the line did not pay its way. All of the operators were men, and some of them had families to support....President Young called upon all of the men and boy operators to teach the art to young ladies, as he thought it probable that they could give more economical service, so we told the girls to put on their bonnets and come to see us."

Four young women of Nephi took up the job with enthusiasm: Elizabeth Claridge, Belle Parks, Hetty Grace, and Mary Ellen Love. As Mary Ellen recalled: "We girls had a happy, busy time that summer and enjoyed our study and practice of telegraphy...in the fall we were assigned to take charge of different offices....we... [kept] in touch with each other by making use of the privilege of chatting over the line after business hours...." 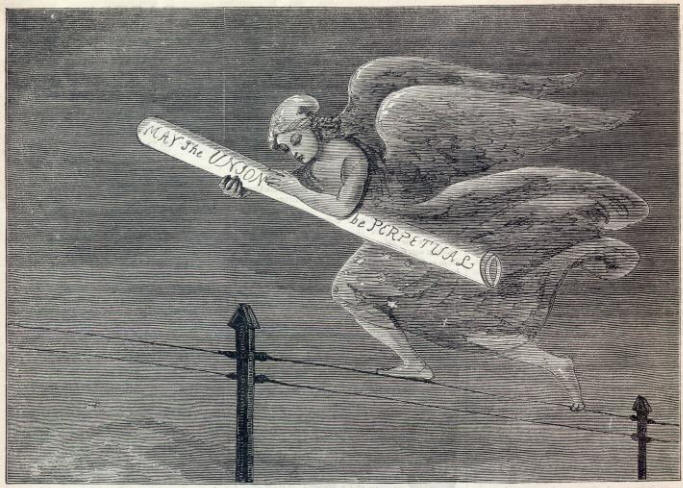 más diversión: Morse begat ASCII. Your keyboard sends a character code variant of Morse with each key.
posted by airguitar at 8:13 AM on April 15, 2005

As for international communication, of course the big step was the trans-Atlantic cable, which went through many false starts before finally succeeding (the various countries of Europe had been communicating by telegraph for years); Wikipedia has a good summary.
posted by languagehat at 11:41 AM on April 15, 2005

doohickie you're probably right about the relaying - I was pretty well gobsmacked at the idea.

Just for the record, here's one of the articles I was reading - scholarly and long but very interesting. Also:stories from women working in telegraphy. And an extraordinary telegraphy resource page that I just came across.

"1844 - On May 24, Samuel Morse sends the telegraph message "What hath God wrought?" from the Supreme Court chamber in the Capitol in Washington, D.C., to the B & O Railroad Depot in Baltimore, Maryland."
thx RavinDave...good thread
posted by peacay at 7:17 PM on April 15, 2005

Does anyone have that picture of the boat laying one of the first trans-atlantic cables? The picture showed a ginormous coil of wire in the hull of the boat with about twenty guys standing on its surface carefully feeding the line upwards as it was needed.
posted by odinsdream at 3:32 PM on April 17, 2005

« Older How should I spend the summer before grad school?   |   What is that movie? Newer »
This thread is closed to new comments.