FAQ on Coronavirus and Mefi: check before posting, cite sources; how to block content by tags

TV shows, movies, books, or other media that involve people living as "someone else" temporarily - whether swapping roles, taking a new role, or pretending to be someone else - to see life in someone else's shoes.


I'm planning an essay based on the concept of "living in someone else's shoes" and I'm looking for things in the media that explore such a concept. Either the person swaps places with someone else, or they see how it's like to be "someone else" for a while.

Movies
* Parent Trap
* Freaky Friday
* The Great Mom Swap (is that the name? Two school friends swap families; one is from a slightly more high-class family while the other is from an immigrant family that owns a deli. The immigrant girl goes out with the high-class girl's brother at some point.)

Any media is fine, though I'm particularly looking at TV, movies, and books.

Howl's Moving Castle - a young girl suddenly experiences what it's like to be an old woman.
posted by misozaki at 4:57 AM on May 31, 2006

I don't know why I keep remembering anime and manga for this question, but Ranma 1/2 is another one that comes to mind. A boy turns into a girl when water is splashed on him and turns back into a boy with hot water.
posted by misozaki at 5:25 AM on May 31, 2006

The movie Just One of the Guys and the recent book with a similar theme, Self-Made Man: One Woman's Journey into Manhood and Back involve a woman trying to infiltrate male society.

Boys Don't Cry
The Crying Game
Clue
The Major and the Minor
Vertigo
City Lights
Some Like it Hot
The Lady Eve
Duck Soup (mirror scene)
Variations on the theme: Strangers on a Train, Top Hat

This happens all the time in Shakespeare plays, many of which have been made into movies or TV Shows: Twelfth Night, Merchant of Venice, Much Ado About Nothing, King Lear...
posted by grumblebee at 5:55 AM on May 31, 2006

The first book of Paul Auster's New York Trilogy, City of Glass, has the writer Quinn assuming the identity of a mysterious detective named Paul Auster.
posted by saladin at 6:15 AM on May 31, 2006

Oh, and Rushdie's Satanic Verses, in which two Indian Muslim actors temporarily become mythical religious figures, one an angel and the other a devil.
posted by saladin at 6:54 AM on May 31, 2006

In Mrs. Doubtfire, Robin Williams dresses as a woman to gain more access to his kids. So I guess it's not exactly the premise you're interested in, although he does gain a lot of insight on how elderly women live.
posted by SuperSquirrel at 7:07 AM on May 31, 2006

"Turnabout Intruder." Captain Kirk swaps bodies with an evil woman!
posted by Kirklander at 7:16 AM on May 31, 2006

I can't believe nobody's mentioned C. Thomas Howell's legendary career-torpedoing blackface role in Soul Man.
posted by staggernation at 7:51 AM on May 31, 2006

Two of the most entertaining melodramas in Bette Davis's career were built on the premise of a woman's theft of her twin sister's identity: A Stolen Life and Dead Ringer. Though the two pictures are quite unlike in plot and mood, they share the (predictable) theme that the grass is not greener on the other side.
posted by La Cieca at 7:52 AM on May 31, 2006

There's currently a show running on FX called Black. White., in which African American and Caucasian families dress up as the other race in order to experience life as an African America/Caucasian.
posted by geeky at 8:19 AM on May 31, 2006

Deception is a miniseries about twin sisters (one poor, one rich) trading places, starring Stefanie Powers.
posted by of strange foe at 9:32 AM on May 31, 2006

MTV actually has a new show called "Why Can't I Be You?" Some dorky kid gets advised by some cool kid he admires. It's depressing.
posted by smackfu at 9:47 AM on May 31, 2006

Noggin has/had a show called "A Walk in Their Shoes" where kids would trade places (someone from a small Alaskan village with a surfer girl from Hawaii, etc)
posted by mikepop at 10:27 AM on May 31, 2006

An early 70s example of a pair of very different NY women swapping lives, apartments and bed partners, somewhere between performance art and going wayyyy too far to hustle for a magazine story, was Nancy Weber's The Life Swap. Out of print, but the link points to some cheap copies on Bookfinder.
posted by Scram at 10:32 AM on May 31, 2006

Nora Vincent recently lived as a man for three years and wrote a book about her experiences in a bowling league, a strip club, a monestary, and dating women: It's called Self-Made Man. It's phenomenal.

Hitchock's Vertigo does some great things with identity.

Also, Shakespeare has tons of characters who pretend they're someone else for various purposes, most of them comedic: Viola from Twelfth Night, Rosalind from As You Like It, the Duke from Measure for Measure. And spells cast in Midsummer Night's Dream cause characters to behave in an entirely different way, which gains them additional trouble/perspective.
posted by mochapickle at 10:34 AM on May 31, 2006

In the same Freaky Friday vein, I can't believe nobody's mentioned Like Father Like Son, starring the Dream Team of Kirk Cameron and Dudley Moore.
posted by mckenney at 11:58 AM on May 31, 2006

Many television examples, of the sub-variety in which two person's consciousnesses swap bodies, over at TV Tropes Wiki: Freaky Friday.
posted by DevilsAdvocate at 11:59 AM on May 31, 2006

any of those many movies that cause an adult and their child to switch places by some magical happenstance...
posted by UnclePlayground at 3:21 PM on May 31, 2006

In the (now cancelled) TV show Dead Like Me the main character dies in a freak accident and is recruited to be a Reaper - basically, harvesting the souls of those about to die. Her appearance is changed as a result, and she ends up having some contact with her family - seeing how they are dealing (or not) with her death. It's not temporary (though I haven't finished the series, so no spoilers, thanks), but it is a rather unique perspective to have of one's life and family.
posted by Rock Steady at 7:24 PM on May 31, 2006

I've seen at least 2 episodes of Charmed where characters switch bodies (one episode where Piper and Leo swap, and one episode where Paige and Phoebe swap). I wouldn't be surprised if there's more (it seems to be a pretty common occurrence in the show that people's bodies are being used by others...)
posted by antifuse at 5:53 AM on June 2, 2006 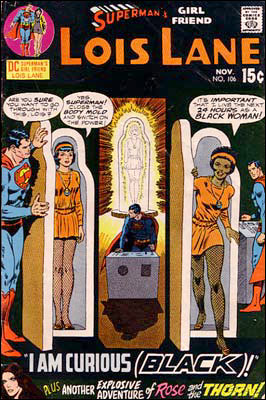 « Older Why did butterfly metamorphosis evolve?   |   Why do people make a lucky cigarette in their... Newer »
This thread is closed to new comments.