The Pronoun Field has been updated! Read about the change and then update your profile

A friend of mine is giving me a pipe tonight. A real pipe, for pipe tobacco. Can anyone suggest any accesory-accesories, such as preferred liquour, chair style, etc...
posted by jon_kill to Sports, Hobbies, & Recreation (24 answers total)
brandy, velvet smoking jacket, white persian cat.
posted by Hackworth at 9:34 AM on September 21, 2004

You really ought to have a nice burgundy velvet smoking jacket, with black and gold brocade trim. A deep brown, overstuffed club chair wonderful, especially if it's a Louis XV, or at the very least, a Chippendale. Accessorize it and make it extra comfy with several handmade, one-of-a-kind, collectible tapesty pillows. And a library to put the chair in, with beautiful, rich mahogany bookcases, filled to the brim with first printings of classic novels. As you smoke, you'll want to be gazing pensively at your grounds, which hopefully will be strewn with charming tapestries which your gardener has trained especially for you, and perhaps a lovely reflecting pool, by the cutting garden. You will be master of all you survey as soon as you light your pipe. I suggest moving into a house that matches your pipe, as soon as possible.

Barring that, the liquor depends on the tobacco. What tobacco are you planning on buying? [/daughter of fanatical pipe smoker]
posted by iconomy at 9:35 AM on September 21, 2004

Or, a nice tweed jacket with leather elbow patches, Ivy League professor style. And a desk chair that leans back a bit, for ease of musing.

While technically he didn't smoke a pipe, Rowley Birkin QC's drunken delivery seems like a perfect accesory to me. Some examples here and here.
posted by PinkStainlessTail at 9:47 AM on September 21, 2004

Oh, you lucky son of a gun.

Screw the smoking jacket. Get pipe cleaners, a tamper, and a reamer. Experiment with some different tobaccos until you find one or two you really like.

The place my husband goes for cigars whenever I have a baby smells like the grandfather I always wished I had--rich, fragrant tobaccos. I always long for a pipe-smoking man when I pass their open doorway when I'm walking down that street.
posted by padraigin at 10:14 AM on September 21, 2004

I've been smoking a pipe since 1978, when Dad caught me with cigarettes in my pocket and, instead of beating the snot out of me as was his preferred method of disciplining teenage smartasses like I was then, suggested, "Why don't you try one of my pipes instead? It tastes a lot better and you don't get so much smoke in your gut." I still have that first pipe of his that he let my try.

I'm guessing you already *have* a chair that's comfortable, no? I like sitting at my desk in an old office armchair that tilts and swivels. I'm eight floors up, typing this at my laptop, beyond which is an open window into which is blowing a refreshing northwest breeze. (Rare for SC in September, lemme tell ya.) Some people are into the leather armchair and ottoman thing, but that's a little effete for me. I have a tweed jacket with the leather elbow patches, but I'm more into the jeans-and-T-shirts thing with an old wool overshirt as a nod to the crisp weather.

Liquor...well, I'd avoid anything carbonated while getting used to smoking a pipe. New pipe smokers tend to draw too hard on pipes, and tongue burn can be a problem at first; carbonation just adds to the suffering. I like a nice Irish whiskey, such as Bushmills or Jamesons. A satisfying Shiraz goes pretty well with Latakia-bearing English tobacco blends, too. Your mileage may (will!) vary.

Lots of newbie pipe smokers start off with vanilla-flavored tobacco. If there isn't a helpful tobacconist around, hit the drug store and see if they have Captain Black in the gold pouch. Another good, mild but satisfying smoke you can usually find in the drug store is Borkum Riff. The whiskey-flavored one is good, as is the cherry blend. Right now, I'm smoking a blend of old Virginias and Orientals that I've flavored and aged myself.

When you get that pipe and fill it the first time, try not to pack it too tightly. Tamp the tobacco just hard enough that it springs back a little but not so loosely that you just dropped it loose in there and there's lots of air space between the individual flakes/ribbons/bits. Fill the pipe all the way to the top of the bowl. As you light it, draw gently on the pipe, moving the flame away from the bowl between draws so you dont char it. The tobacco will "crown" upward slightly as it chars to ash. Tamp this ash down so that the powdered ash coats the rest of the tobacco on top. This ash acts as a catalyst to help the rest of the tobacco ignite when you light the pipe the next time.

Expect to tamp the tobacco and relight it occasionally. Unlike cigarette tobacco, which has been treated with chemicals to sustain its burning, pipe tobacco tends to go out unless you're constantly drawing on the pipe. As your smoking technique matures, you'll find you're relighting your pipe less often than at first.

Ideally, you'll want to run a pipe cleaner through your pipe each time you smoke it, especially when it's new. I wouldn't smoke more than two or three bowls of tobacco before giving the pipe a rest to dry out inside; moisture building up inside a pipe can sour it. You might want to get two or three inexpensive corncob pipes and rotate through them if you smoke a lot.

To name one tobacconist who's online and sells tobacco in convenient samples, try Cornell and Diehl. The quality's definitely there and the prices aren't half bad. Mr. Tarler has some really nice blends, and he'll custom-blend for you if you want. You'll have fun reading all the different tobacco descriptions, I promise.

If you're familiar with USENET, you might want to become introduce yourself on alt.smokers.pipes, where a warm and enthusiastic welcome awaits you. Also, a pretty good "one-stop-shop" Web page for pipes is here.

A final word of advice: Brush your teeth after you finish smoking and before you kiss your sweetie.
posted by alumshubby at 10:28 AM on September 21, 2004 [1 favorite]

I wrote extensively about advice for a budding pipe smoker in an earlier AskMe thread here. My comments start here. Sorry for the cf, but I really don't feel like typing it all again. :)
posted by jammer at 11:45 AM on September 21, 2004

The place my husband goes for cigars whenever I have a baby smells like the grandfather I always wished I had--rich, fragrant tobaccos. I always long for a pipe-smoking man when I pass their open doorway when I'm walking down that street.

It's a funny thing I've always wondered about. I had an uncle who smoked a pipe and I thought it smelled wonderful and rich. My father smoked cigarettes and the smell of them made me want go gag, never mind the smell of him after he'd been smoking. I've never known what causes that difference.
posted by jacquilynne at 12:06 PM on September 21, 2004

jacquilynne--additives in cigarette tobacco to keep them lit (as well as to stretch the tobacco, plus the fact that people will smoke stale tobacco in a cigarette, but not generally in a pipe) are the reasons cigarettes smell nasty. pipes, cigars and some brands of very high-end cigarettes don't have anything in them to keep them lit and they go out regularly while you're smoking them. but you just re-light and keep on smoking (or not).
posted by crush-onastick at 12:36 PM on September 21, 2004

See also this thread. I got some great advice from it. Bare necessities for pipe-smoking: pipecleaners, matches (not a lighter), and one of 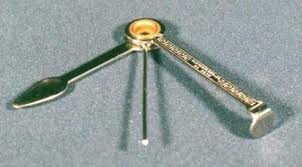 Almost everything's already been mentioned, though I prefer Port and a mild english blend tobacco. You'll definitely want a leather pouch with separate compartments for your tobacco, pipe, matches and tamper/reamer. Be sure to get a button humidifier to keep the tobacco from drying out. As someone who smokes cigars, pipes and even buys loose cigarette tobacco, I can't emphasize strongly enough the importance of maintaining appropriate levels of moisture in your tobacco.
posted by Metametadata at 1:47 PM on September 21, 2004

A friend once told me that the stuff in cigarettes that keeps the tobacco burning is chemically akin to gunpowder. I'm not smart enough about pyrotechnics to evaluate the truth of this. Any organic chemists in the house?

On review: A butane lighter is just the thing for sparkin' up your pipe. I got a really nice Corona last Xmas. Failing that, I'd recommend wooden kitchen matches, the big kind that burn a little longer than the itty-bitty ones.

jon_kill, make sure to follow the links jammer provided; he goes into a lot more detail than I did.
posted by alumshubby at 1:49 PM on September 21, 2004

I believe there's gunpowder (or a similar substance) in the cigarette papers, not in the tobacco itself. And it's not only expensive brands which produce pure-tobacco cigarettes; most Winstons these days are additive-free, as are American Spirits.

There is a brand of cigarettes called 'Paper Pipes' or something along those lines which is made with pipe tobacco. It's definitely a very different taste and smell than any other type of cigarette I've had (and for a while I was smoking a different obscure brand every day). Rather foul, if you ask me.
posted by IshmaelGraves at 3:22 PM on September 21, 2004

I would shy away from flavored tobaccos; their oils foul the pores of the wood in your pipe. I smoke very rarely - I am a doctor, it's frowned upon - but when I do, I enjoy blends of tobacco made with either Virginia burley or a touch of perique. It should be fresh and moist, and it's a bit of a trick to get it tamped the right amount - I overtamped it the first time and couldn't get a good draw going. Fiddling with the pipe is a bit of an art and certainly constitutes a large part of the practice of pipe-smoking.

I like Remy XO best of all with my pipe.

My tobacconist is quite some distance away, which prevents me from getting hooked and provides an excuse to travel to Montreal every so often.
posted by ikkyu2 at 7:49 PM on September 21, 2004

Thanks for the great answers, everyone.

I have the pipe now, just need to duck out to the tobacco store for the tobacoo.

« Older What to include in a movie-clip library for...   |   Door holding etiquette Newer »
This thread is closed to new comments.